Today is the 46th anniversary of this Creedence Clearwater Revival show in the Los Angeles area.  The recording is not bad either.  The source being low generation (2nd generation) helps I am sure.  But there are issues with the recording too.  I'll get into those below as I describe the recording.

I couldn't sleep tonight, and since I haven't been able to upload a show in a long time, I decided to see who's concert anniversary it was today.  I am trying to get to a point where I can start uploading regularly again but it has been difficult lately.  And on top of other issues keeping me busy, the hard drive on my main PC (this PC) is failing and will "imminently fail" according to the boot up message.  So this is something I'll have to take care of before I can return as well.

The waveform has no clipping (or maybe one spike into the red really) and it doesn't show any brickwalling.  But the audio likely has been amplified and it is close to being maxed out in  the waveform.

The audio sounds great but it has issues as I mentioned.  There is some distortion in louder, heavier bass parts of the show and there is also an issue early on that sounds like a flat spot on a tape head on the tape recorder/player or maybe just a tape issue where the audio goes between good and great sounding in waves.  But this clears up for the most part too as the show progresses.  And the instruments can easily be heard as can the vocals.  But again, the "flat spot on the tape head" sound does keep on chooglin' (or arising) and keeps appearing in various spots around the bend.  OK, enough CCR humor/analogy here.

There are some songs reportedly missing from what I researched and there are a few dropouts in the recording.  But it really does flow nicely in the show and it is not a big issue.

Thanks to "deadhead69" for sharing this one on Dime a while back.  I listened to the whole recording as I was preparing the post and it is really a nice one.  With so many CCR shows (audience and soundboard recordings) having distortion, being bad recordings, etc out there; it's nice to hear one you can actually understand and hear the different musicians equally on.  If it wasn't for the tape/recorder issue in the audio it would easily be an excellent recording.  But to a CCR fan, I think you'll like it just fine as is.  The guitar really sounds great in this show also!

I hope you enjoy the show...

SPECIAL NOTICE TO ALL!!!

ALWAYS REMEMBER TO SUPPORT THE ARTISTS BY BUYING THEIR OFFICIALLY RELEASED MATERIAL TOO. 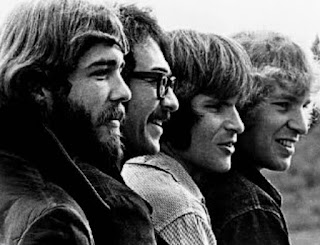 Posted by Bootradr at 5:51 AM No comments: